Welcome to the fantastic world of Renate Lechler

Finally an overview of the Permanent Exhibition on ORBS

that can also be visited online!

A warm welcome full of joy in this virtual tour that allows everyone a short tour among the many panels (currently 120) of the Permanent Exhibition on ORBS in the Garden of ORBS and Crystals. 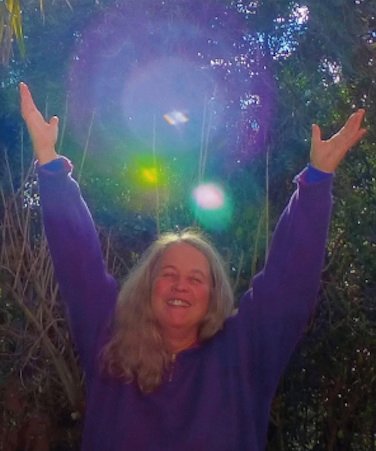 This photo belongs to a lucky series taken by Ilaria Risaliti, my irreplaceable botanical assistant, who succeeded in portraying many polychrome ORBS that seemed to dance in my arms or come out of my hands. Here too, a particularly luminous area is visible in the centre, of an atypical rhomboid shape: could it be a tiny ship from space? 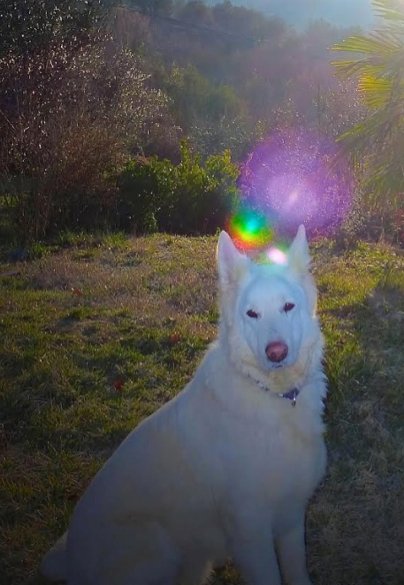 In the full splendour of its princely existence, here Luxor seems crowned by the presence of very colourful and luminous ORBS, like a real king. Luxor was a great protagonist of my photographic series, as if the great affection that bound us worked as a special catalyst in attracting ORBS! 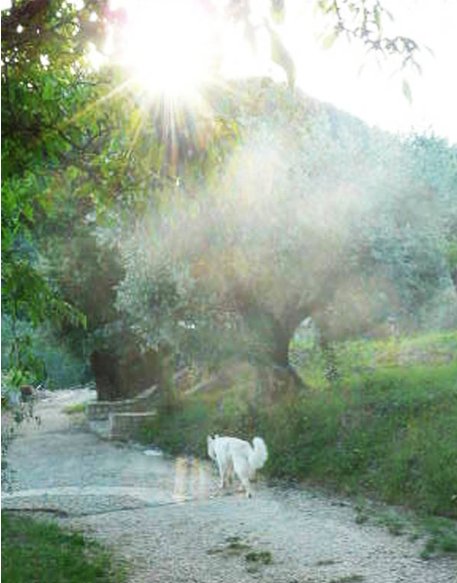 This image is particularly rich in elements: you can see an ectoplasm at sunset and next to my beloved dog Luxor seems to walk another dog, like a spirit guide. This strange being appeared just before Luxor fell ill with cancer, as if to accompany him gently along the path that awaited him. 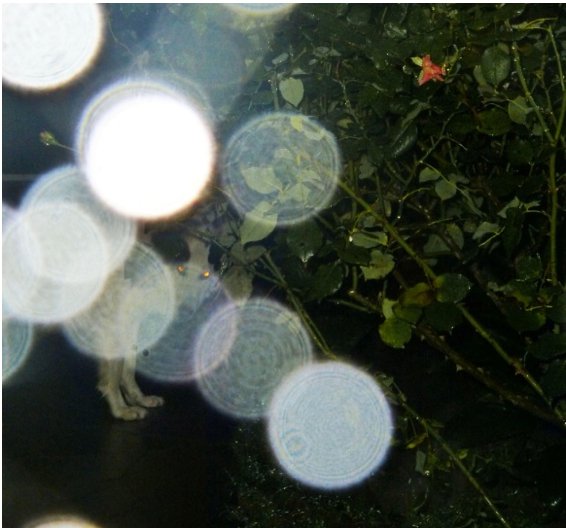 Here the presence of the leaves helps us to perceive the incredible dimension of these mandalas that take shape among the impalpable threads of a spider's web. Luxor also appears in the background, as protected by several overlapping mandalas, all very light green in colour, but also turquoise or white. Let's remember here that mandalas often recur even in crop circles, in the form of fantastic and gigantic designs that are still unexplainable. 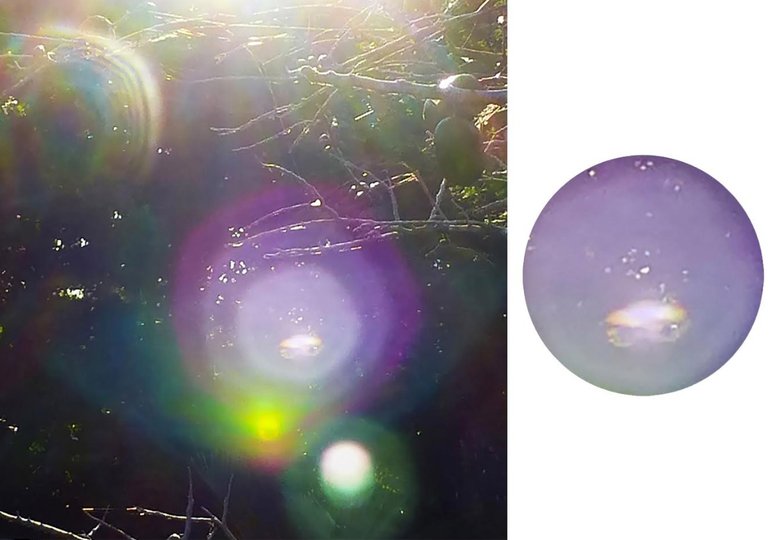 ORBS invite us to look at life with new eyes. It is no coincidence that I chose this photo as the first to begin the exhibition: in the great beauty of shapes, lights and colours, an enlargement miraculously revealed two strange eyes in the centre, like those of an extraterrestrial. For this reason it attracted the attention of ufologists and I also included it in the book, ORBS: Symphonies of Light. 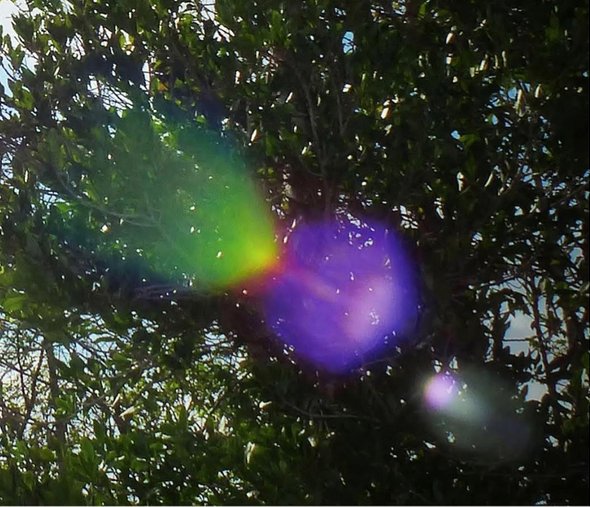 The vast majority of photographs were taken by me around my house. The island of Elba, Yucatan and especially Cuba are the other places where the most spectacular ORBS have appeared. I don't think it's a coincidence that these three places are the places where I have loved and continue to love most intensely. I am in fact convinced that emotions, especially positive ones, are a particular catalyst for ORBS. 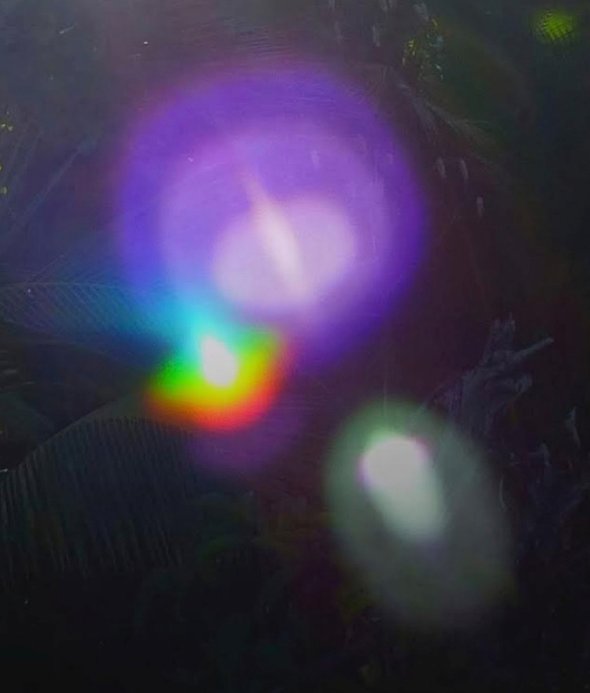 Here appear the typical colours of the ORBS in Cuba, where purple is always the protagonist. We can also observe their different shapes, from circular to elongated, or even rhomboidal, like an orbiting spinning top with all the colours of the rainbow. 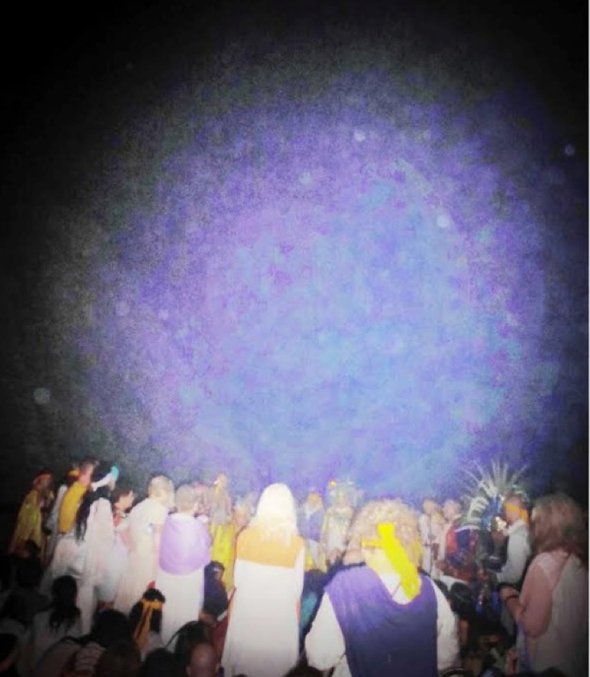 In one of the most intense, long-awaited moments during the Mayan Initiation Ceremony, it seems to take shape in the huge globe of light in the centre. For me it was a dream cultivated since I was young and finally realized on that particular occasion in Yucatan, which was also the beginning of my long adventure with the ORBS. 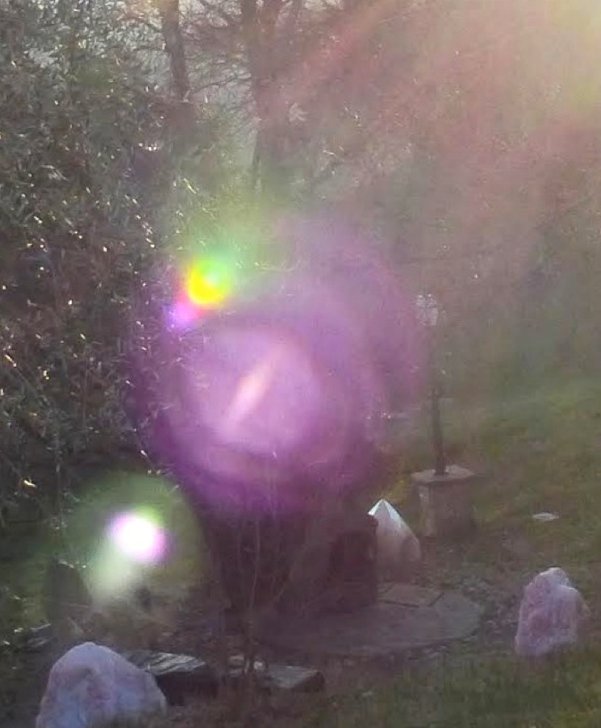 At the centre of the Circle of Crystals is this enormous amethyst, opposite the rose quartzes. Even the light seems to have been attracted by their power, appearing here in very large and polychrome shapes. The Circle of Crystals contributes to the energetic peculiarity of this park, one of the few places in the world with such high values on the Bovis Scale: their energy creates an environment particularly suitable for meditation and energy-emotional regeneration. After the first lock-down, many visitors have got into the habit of staying in the Circle for a long time, spontaneously, and even coming back to feel its beneficial effects on body and soul. 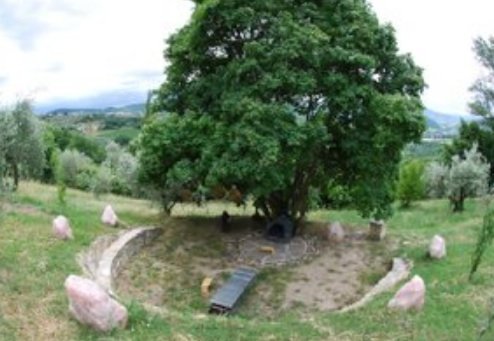 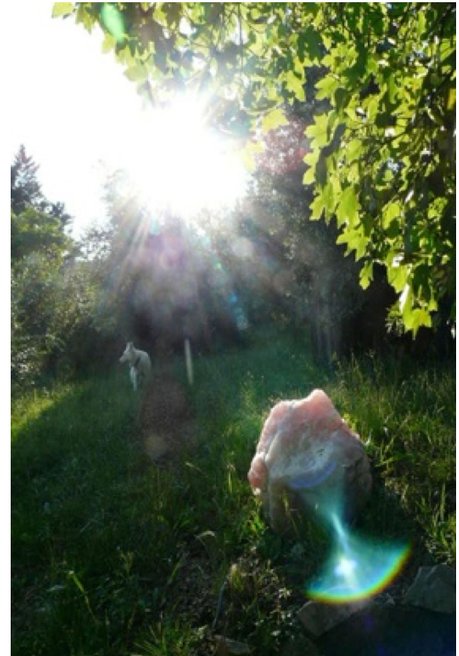 Garden of ORBS and Crystals 2013

Next to this rose quartz, on the other hand, even a white cross appears: in a very unusual way, this type of apparitions took place simultaneously all over the world.

Continuing with my experiments, I have learned how much ORBS can also play an active role in contributing to the energetic cleanup of a place. I discuss this in detail in the appropriate chapter of my book ORBS: Symphonies of Light. Here we see the large golden-yellow mandala that appeared in the initial phase to protect the environment, right in front of the entrance door. On the right side there seems to be also an arrow, very well distinguishable in the enlargement, as an invitation to push the dark maybe out of my habitat.

In these two images the energetic cleaning process seems to be very visible thanks to the ORBS: from the window under the roof you can see the exit of an ectoplasmic mass, first green and then white. When I took these pictures, my body was also shivering with freshness: for me a tangible sign that the cleaning was actually taking place!

Towards the end of the energy cleansing ritual, several huge spheres appeared on the roof, so big that they looked like planets. In particular, two enormous spherical presences, a red ORBS and a blue ORBS, attracted my attention and overlapped each other until the shape of a heart appeared.

Among the spheres that emerged from the energy cleaning process, these two images also contain something very special. The first one, golden in colour, is like a disc of which one can see behind even the trail: an expert on ORBS has connected this particular colour to wisdom. In the second, which once again depicts the heart, we can instead distinguish in the centre a strange formation that takes the colouring inversely symmetrical (red to blue and blue to red), like a true Tao of love in the rosy centre of the encounter. 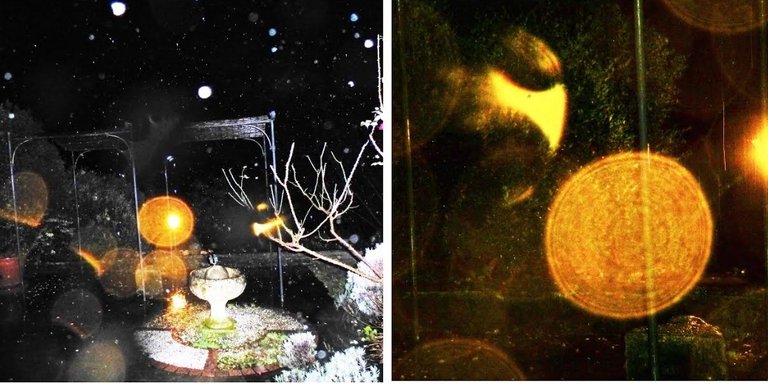 Also from the lucky sequence of that special evening, here is another truly exceptional shot depicting a golden ORBS. Its particularity lies in the fact that I could distinguish it even with the naked eye! In the photo on the right it seems to reveal its presence in a battle between light and darkness, taking the form of a mandala with a little girl's face inside it (which can be clearly distinguished from the live, looking at the giant pictures printed on the panels), while a golden trumpet between the branches of the rose also takes shape, as if to announce the victory of Light. At the culmination of the energetic work with my colleague, we played crystal bells, and after a while we both perceived as echoing some really unusual sounds for these hills, similar to those emitted by whales or ship sirens. 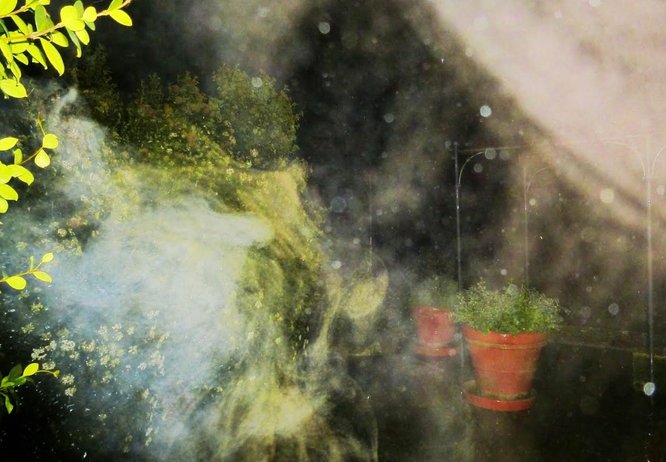 Here we can observe only a small part of the giant ectoplasm, presumably about thirty metres wide, which appeared immediately after a storm. Usually ORBS use ectoplasm to move all together in large groups. Just as it happens when an ectoplasm appears during a seance, called by people who know how to make this kind of invocations, the most varied forms of ectoplasm can also appear in ORBS ectoplasm as vehicles of some message they are trying to communicate to us. 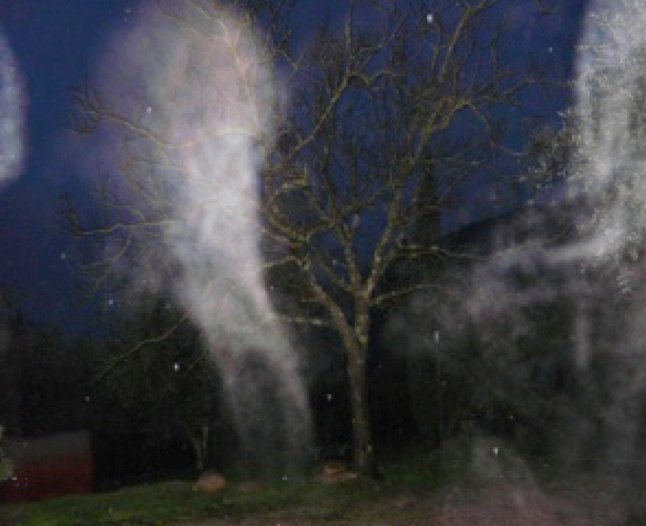 16. Nebulous vortexes with old walnut, Garden of ORBS and Crystals 2013

This old walnut seems to be particularly attractive to the luminous whirlwinds, so much so that I have managed to photograph them in its vicinity several times. This ectoplasm is much more compact and smaller, but seems to come straight out of the earth around the walnut to turn quickly to the sky. 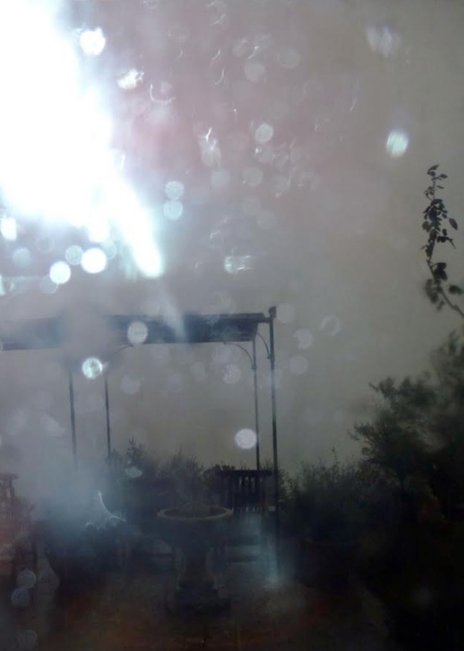 In October 2018 there was a very destructive storm, during which I was able to almost immortalize the victory of Light over darkness: a form of greeting that is as topical as ever in difficult times like the one we are going through. 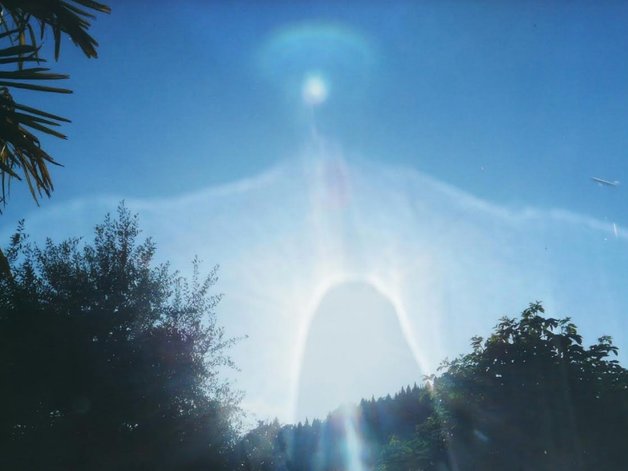 13. Protection from above, Garden of ORBS and Crystals 2013

The photo was taken at sunset: due to its peculiarity, it has become for me the emblem of welcome in new dimensions. You can see a sort of luminous giant, several metres high and equipped with a halo, which opens its arms as if to protect its surroundings. On the right side, above the arm, you can also see a further alien presence, in the shape of a cigar in the blue sky. 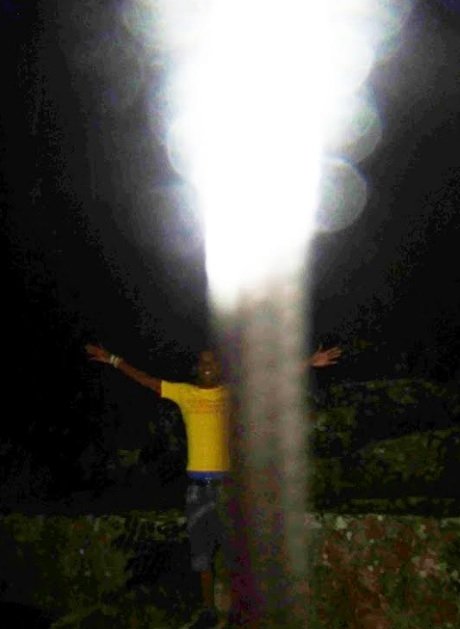 Here we can only see a small part of the huge tube of light, more than thirty metres high and surrounded by ORBS. It could be a healing tube, but ufologists report that similar lights seem to come down from spaceships as well. 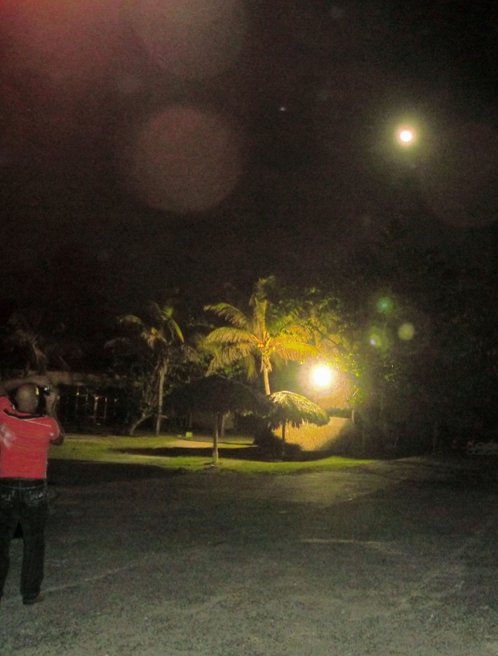 It seems that red, in ORBS, indicates a particular closeness to the Earth. Here we can see real Red Giants immortalized even with the full Moon! Normally it is very difficult to photograph ORBS during the full moon. 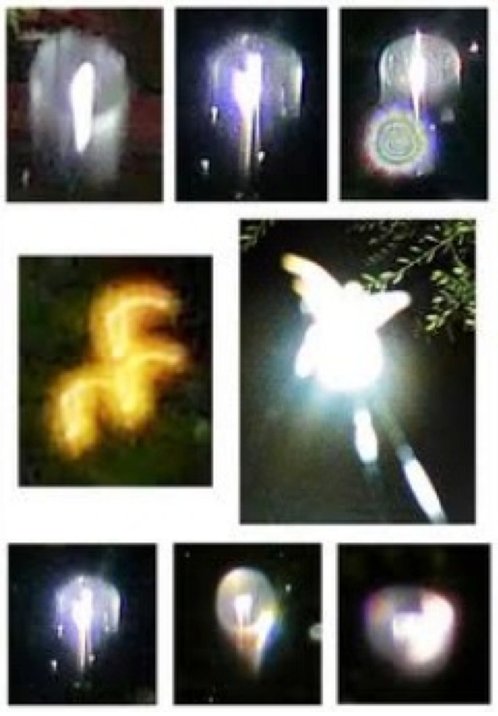 Here the shapes that emerge photographing drops of water become even more particular and complex, until they assume the contours of an angel among the leaves of an olive tree: a true sign of peace and serenity! Very unusual, at the bottom right, is the presence of angles and straight lines in an ORBS. 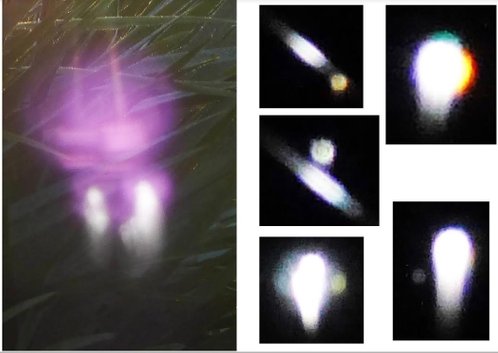 Here the light seems to perform a real miracle, forming almost a crib, in which you can see the characters surrounded by the violet light of protection. 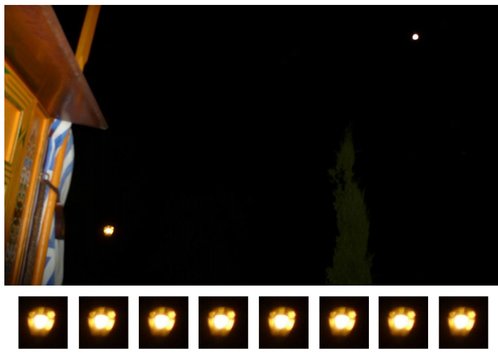 An expert ufologist, met at the Ufologia World Conference in Rome in 2019, saw in these presences of light, immortalized between the yurt and the full moon, the possibility of a mother ship surrounded by satellite ships on a mission to Earth. 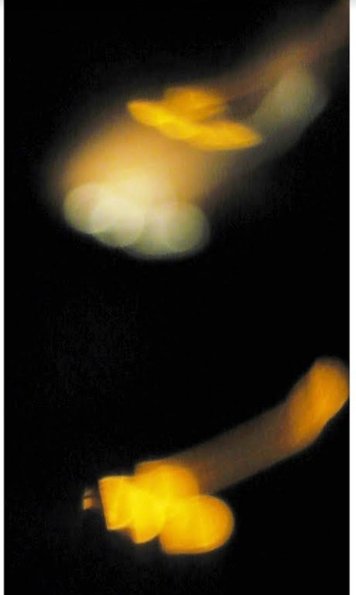 Can these unusual lights be UFOs? To the experts it seems so. At the beginning, I, too, didn't really know how to interpret these surprising presences, among the very first ones to appear in my photographs. 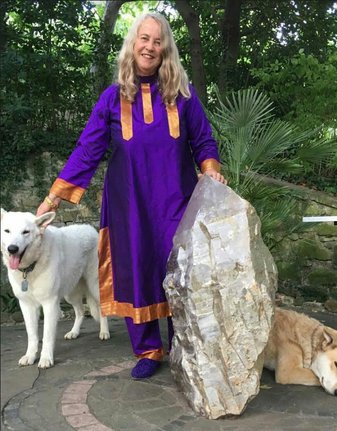 Your virtual visit ends here: I'm waiting for you live, here at the Permanent Exhibition, where in 120 huge panels you will have the opportunity to catch many details through the enlargements on aluminium, but above all you will be able to enjoy directly the enormous energy that makes this place an ideal place where you can relax, recharge your batteries and regain the strength lost in everyday life, giving you a healthy regenerating holiday or enjoying the fresh bio-lake. 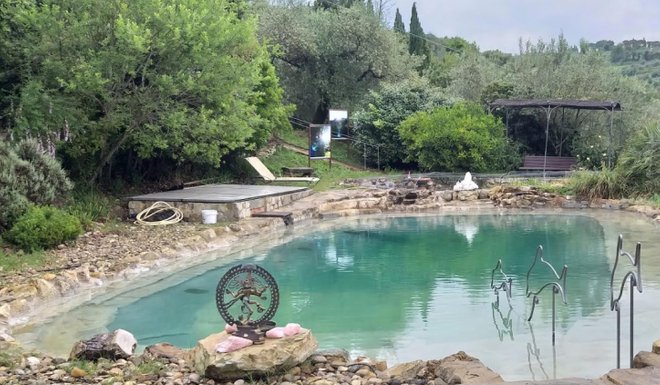